An Armed Forces Community Covenant between the former Basildon Renaissance Partnership, the civilian community of Basildon and the armed forces community in the Basildon Borough. 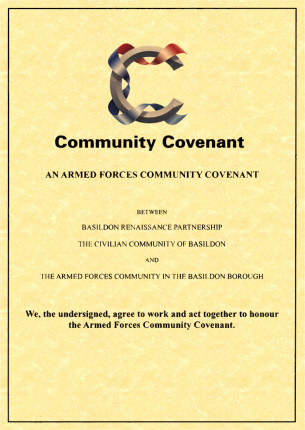 In November 2012 on the behalf of the civilian community, the Mayor of Basildon signed a military covenant pledging mutual support between the Armed Forces, veterans and the wider community.

This covenant was also signed by Lieutenant Colonel Mick Aston MC of The Royal Anglian Regiment on behalf of the Armed Forces, and the then Leader of the Council, Councillor Tony Ball, on behalf of the former Basildon Renaissance Partnership.

Aims of the Community Covenant

Enquiries please to the council's Head of Engagement, see contact details below.