The Mayor of Basildon Borough 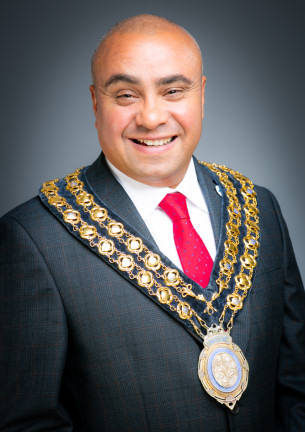 Councillor David Burton-Sampson was elected Mayor of Basildon by his fellow Council members on Thursday 23rd May 2019.

David has been a Basildon Councillor since 2016 and previously held the role of Deputy Mayor during the municipal year 2017/18.  His key aim, both as a councillor and in his other work in the community,  is to improve the lives of residents across the whole borough. During his time as a local councillor he has founded 2 borough residents associations, both of which are thriving.  He is also a keen advocate for inclusion and diversity and has won 2 awards in recognition of his work within the LGBTQI+ arena.

Throughout his time as Mayor, David is continually looking for ways to support as many of our community groups as possible, not just in the short term but by helping set them up for the future.  With that aim in mind he has worked with fellow councillors and officers to successfully launch the Basildon Borough Lottery, which will help provide  local community groups with a regular income stream.

David's chosen charity for the 2020/2021 is The Polly Parrot Appeal in support of children in Basildon and Thurrock University Hospitals. He will also be continuing his support for The Mayor's Community Foundation which enables groups and organisations that he meets with throughout the year to apply for funds from his fundraising pot in order to help fund small projects.

Councillor Derrick Fellowes was elected Deputy Mayor of Basildon by his fellow Council members on Thursday 23rd May 2019.

COVID-19: Post your messages of remembrance, reflection or recognition

Everyone in Basildon borough has been affected by Covid-19. Sadly, some have lost loved ones due to this virus. Others have lost loved ones during this time and been unable to say their goodbyes in the way they would have wished. In remembrance of those we have lost and those who deserve recognition we invite you to post a message on our COVID-19 commemorative page. See...

Mayor - Invitations to events
The Mayor welcomes invitations to attend official events held by local organisations.
Mayor's Charity Appeal
The Mayor's charity appeal is raising money to support the Polly Parrot Appeal for children in Basildon Hospital and for local food banks
The Role of the Mayor
The role of the mayor is predominantly a ceremonial one, supporting the community and promoting the interests of the Council and Borough.
The Mayoral Badge of Office
The Mayoral Badge of Office represents all parts of Basildon Borough.
Contact The Mayor's Office