Basildon Mayor David Burton-Sampson is partnering with the Polly Parrot Appeal at Basildon Hospital to help provide a comforting space for children and their families staying at the hospital. He has also announced donations to support the work of the borough's food banks. 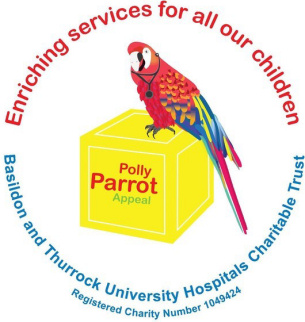 The Polly Parrot Appeal at Basildon and Thurrock University Hospital

"I am excited to announce a partnership with The Polly Parrot Appeal at Basildon Hospital which provides an amazing service for families in frequently heart-wrenching situations.

"The Polly Parrot Appeal has launched a project to convert a piece of land between the hospital's children's wards and the Polly Parrot Pad - an area where relatives can get some respite whilst their children are in hospital - into a wonderful outdoor interactive area.

"It will include a sensory garden and sun-protected areas for children and their families who are staying at the hospital so they can have some much needed time outside.

"We are extremely grateful to the Mayor for selecting the Polly Parrot Children's services appeal as his chosen charity of the year. The appeal benefits families and children visiting the children's wards and departments at the Hospital. Money donated from the Mayors fund will be used to create a new outdoor garden for the children staying in Hospital, including new flooring, play equipment and a sensory area."

Support for our local food banks

In recognition of the incredible work the borough's food banks are doing during these tough times, the Mayor has made the decision alongside the trustees of The Mayor's Charity Trust to donate £500 to each of the following food banks to help support their work:

The donations come from the Mayor's Community Foundation, which aims to give grants of up to £500 for small projects to organisations the Mayor or the Deputy Mayor have visited during the year. The foundation is part funded by the Basildon Borough Community Lottery  which helps provide a regular income in to The Mayor's Charity Appeal

A look back at the Mayor's Charity Appeal in 2019

Over the year 2019 the Mayor's Charity Appeal raised £12,404 which, as well as supporting Mayor's Community Foundation, enabled the appeal to  give financial  support to the Jo Cox Foundation, which was the Mayor's own chosen charity for 2019.

The Mayor's Charity Appeal also led the setting up of the fantastic local offshoot ' More in Common Basildon Borough '.

More in Common is a group which works to tackle loneliness and social isolation in our borough as well as promoting greater community cohesion and bringing together all the amazing charities and services in our borough in to one easily accessible place.

Mayor of Basildon, Councillor David Burton-Sampson: "I am incredibly grateful to every one of you who have contributed in one way or another either financially or by supporting or volunteering at one of our events."

For further information and enquiries see contact details below.