BREXIT: If you're an EU citizen, you and your family will be able to apply to the EU Settlement Scheme to continue living in the UK after 30 June 2021.
Read more

In the news: Meet your new Town Centre Teams 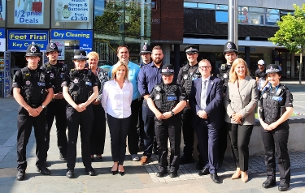 The officers will be able to conduct visible patrols and investigate concentrated community issues in Basildon, Billericay and Wickford.

Four of the eight officers will be assigned to Basildon, with a pair of officers covering Billericay and Wickford respectively. All six officers will be led by Sergeant Paul Hogben and will come under the banner of Town Centre Teams to support the ongoing work of Operation Raptor and the district's Community Policing Team.

Community issues are at the forefront of the Town Centre Teams' priorities, including crime against local businesses, drug dealing, antisocial behaviour in town centres, and ensuring that clubs, bars and pubs in the three towns adhere to their licensing agreements.

"We know that there are issues the community wants us to have more time, and resource, to tackle. With these officers, we'll be able to get to the heart of these issues and extend the great work done by existing teams.

"Drug dealing remains a big problem in the area, specifically in Basildon, and we will be using public knowledge and our gathered intelligence to target hotspots where we know deals are taking place. It's also our duty to support vulnerable people who may be caught up in this lifestyle, as we know that this can have a devastating impact on families and on the community as a whole, so we'll be working closely with charities and support networks to help as many people as we can.

"Our eight officers have all come from the response team in Basildon, so have a great knowledge of the areas they'll be policing, and I know they're ready to get stuck in to being a visible presence and meeting the businesses, community leaders and organisations that make Basildon, Billericay and Wickford so special."

Councillor Gavin Callaghan, Leader of Basildon Council said: "Reducing crime and anti-social behaviour in our town centres is something that residents raise with me and obviously that makes it a priority for the council. We are about to embark on reinvigorating and updating the Town Centre masterplans and people feeling safe in a welcoming and vibrant environment will be vital for success and encouraging businesses, residents and visitors to come to our town centres".

Essex Police's investment in more policing in town centres will place officers in 23 locations across the county to deal with the issues on your doorstep.

As part of the force's dedication to visible, frontline officers, the 58 constables will tackle the most prominent issues in local communities, making for a safer county and stronger relationships with the public.

In the south of the county, officers will be servicing Basildon, Billericay, Canvey, Rayleigh, Rochford, Southend and Wickford.

For more information on the Town Centre Teams visit www.essex.police.uk/your-area/basildon/.