26 April 2019 - A campaign which saved 24 tonnes of waste from going to landfill has been shortlisted for two national recycling awards. 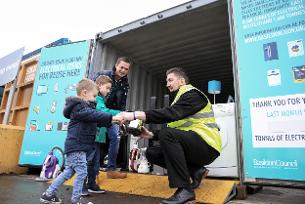 The campaign featuring the 'Essex Talking Toaster' video resulted in a massive 97% increase of donations, making a significant impact across the borough.

Almost 24 tonnes - the weight equivalent of five elephants - of WEEE was collected and diverted from landfill during the year since launching in January 2018 up from 11.852 tonnes in 2017.

Alan Underdown, Basildon Council's Waste Management Officer, said: "This campaign has had a wonderful impact; saving money, helping the community with affordable electricals and the environment. We are really pleased the community got behind this initiative and are delighted to be shortlisted in not one but two categories at a top industry awards."

Residents can place all unwanted electrical items that are in good working order into a specific container which Lighthouse will collect and retrieve for repair/reuse.

Outlets have also been set up in local libraries, including Billericay, Wickford, Fryerns and Laindon, for all small electrical items.

The winners will be announced at a ceremony on Thursday 27 June at the London Hilton on Park Lane.

Find out more about the initiative at www.basildon.gov.uk/reuse.

Lighthouse Furniture Project are a non-profit, social enterprise and registered charity, which collect the unwanted electrical items, make small repairs where possible, and sell them at reasonable prices to support their charitable aims.