In the News: Development contract awarded for East Square cinema and restaurants scheme

12 March 2019 - The development of a 10 screen cinema and six new restaurants in Basildon's East Square has reached another significant milestone after Simons Group were awarded the build contract. 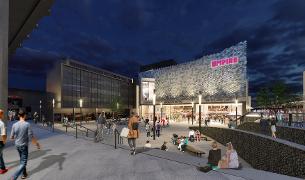 The contract was awarded at a meeting of Basildon Council's Regeneration Committee on Tuesday 26 February.

The plans for East Square include the 10-screen cinema, which will include the biggest screen outside of Leicester Square, and six new restaurants.

The redevelopment, which also includes significant improvements to the look and feel of the square, will make the area a beacon for leisure and evening entertainment, creating a thriving night-time economy.

Councillor Anthony Hedley, Chairman of the Regeneration Committee, said: "This is a significant milestone in what is an exciting project that will transform the town centre.

"East Square will be a vibrant development, which will bring more life into the town centre while boosting the local economy and providing new jobs for local people.

"We want East Square to become a destination of choice and provide a mixed use town centre. We are committed to creating a much-needed night-time economy."

Tom Robinson, Chief Executive, Simons Group, said: "We are delighted to be working with Basildon Borough Council on such an exciting project for the town, particularly during its 70th anniversary celebrations.  The cinema will be a fantastic addition to Basildon and one which will bring much enjoyment to local residents. We are looking forward to starting on site and hopefully becoming an integral part of the town and its community over the coming months."

Enabling works are already underway after Thurrock firm, Squibb Group, were awarded the contract to prepare the site for development in December.

Justin Ribbons, Chief Executive of Empire Cinemas, added: "Empire Cinemas are fully supportive of the development and are impressed with the focus and commitment of the council in bringing forward the project".

For further information about the plans contact the council's Regeneration Team at regeneration@basildon.gov.uk